Today was a day of walking. I ended up walking 16.86 miles today. My feet hurt a little bit, but it was a great day of adventuring. 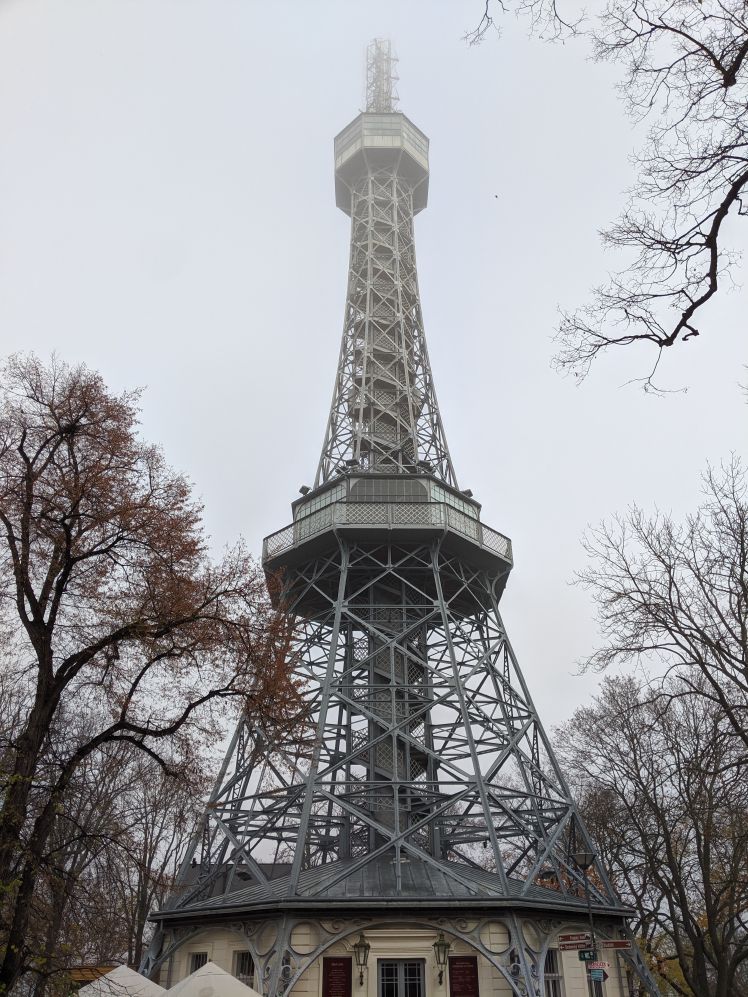 Since my hotel is right on Petřín hill, I started my morning walking up to the Petřín Lookout Tower. I really wanted to climb to the top of it, but I decided it was too foggy and the view wouldn't be very good. I decided to go down the hill through the park and toward Vyšehrad. 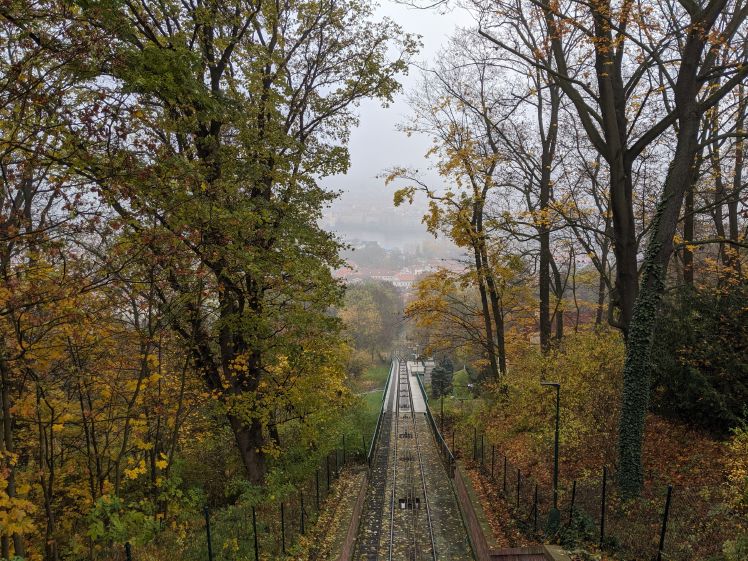 The path criss crossed the tracks of the funicular train, so I decided to take in the slope. I almost had the entire park to myself. I am not sure if that was because of the weather, or the fact it is Sunday. At the bottom of the hill, I was effectively in the middle of town on the newer side of the river. 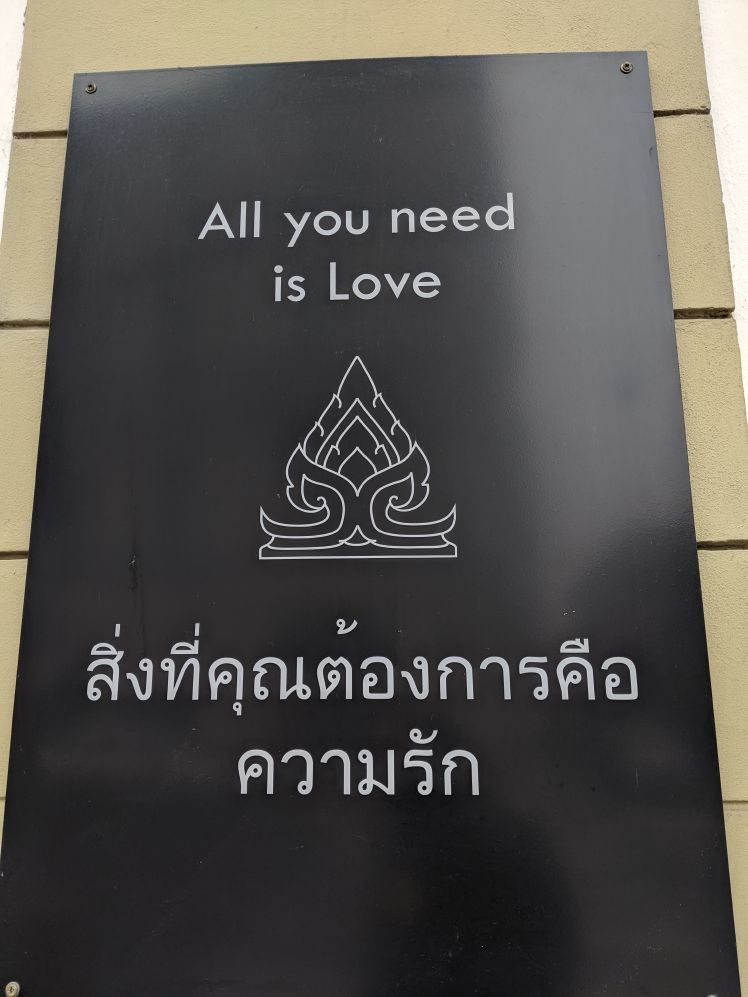 This ad for a restaurant caught my eye. It was way too early to stop for lunch, and I had a lot of distance to cover yet. 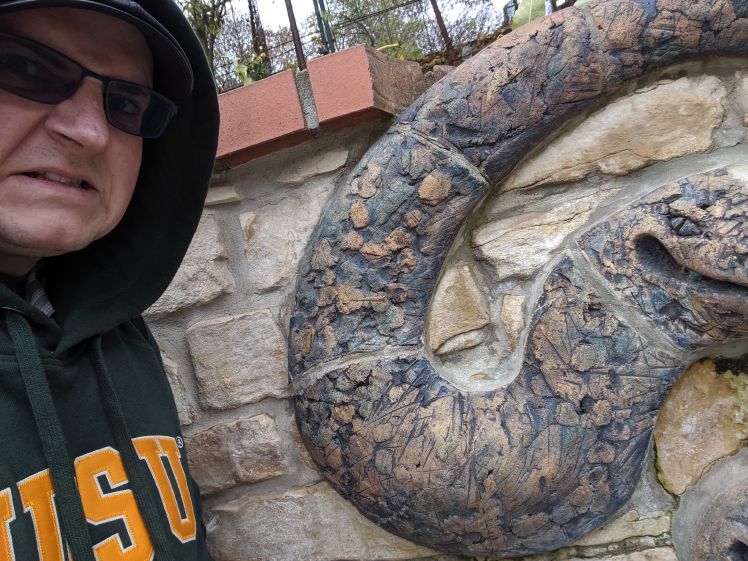 I kept walking and found an odd shaped park that was essentially a long rectangle terraced barely above the street. That is where I found this snake. His mouth apparently sources water on warmer days. I kept walking toward Vyšehrad. 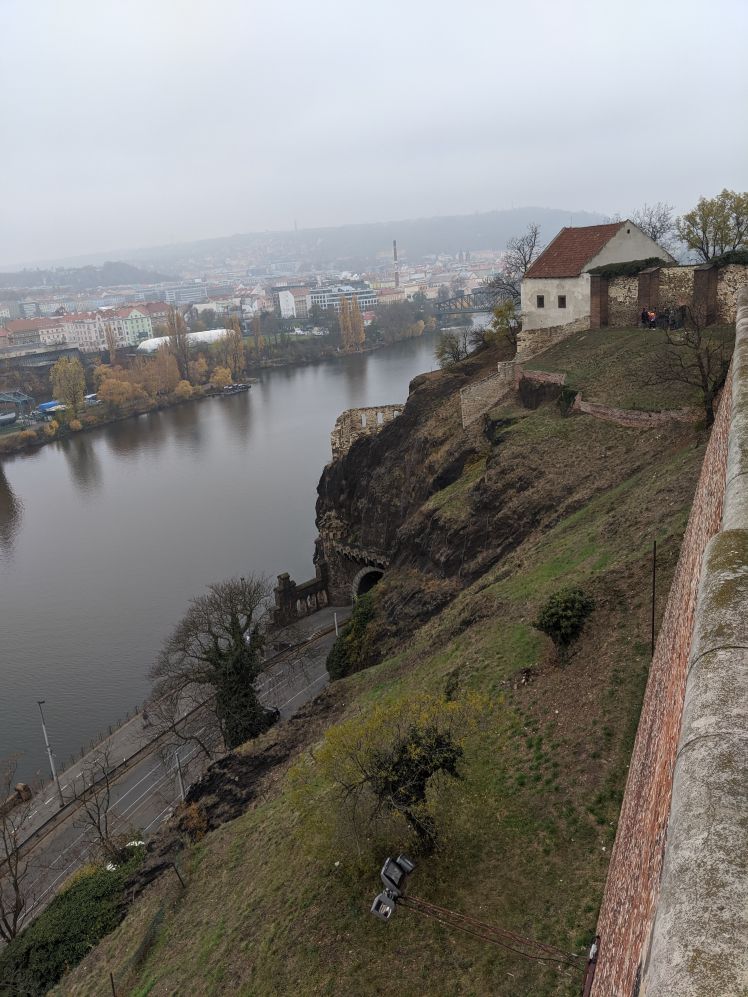 The trek was worth it. Vyšehrad is a fortress on the location of the first settlement of Prague. You can walk all around on top of the walls. I had lunch at a small cafe in the center, then explored the grounds. There was an old basilica near by and a really old cemetary with a bunch of famous Czechs. What I think is really cool is how these really old places are still being used; I saw an active preschool, an amphitheater, and an art gallery. 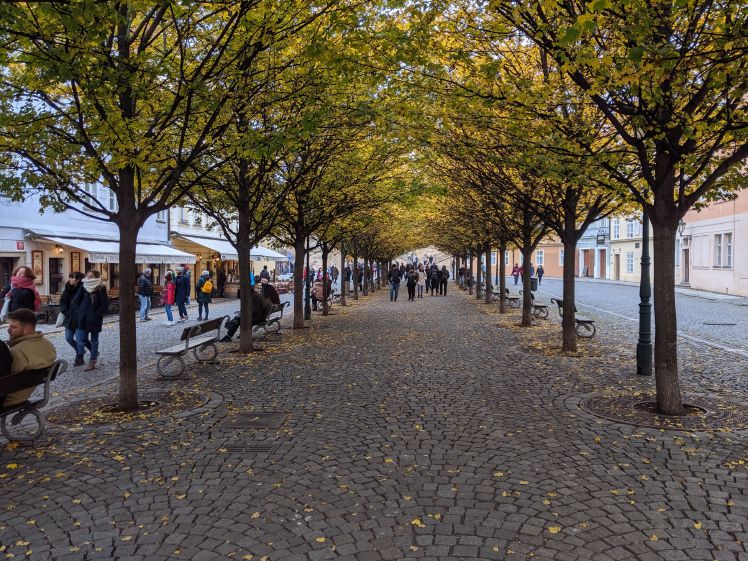 I decided over lunch that I was going to go back and find the art and ice cream I didn't get yesterday. I headed back north. Along the way, I saw an art exhibition and walked through the sculpture garden. There were these creepy babies crawling with something that looked like boxing gloves over their heads. 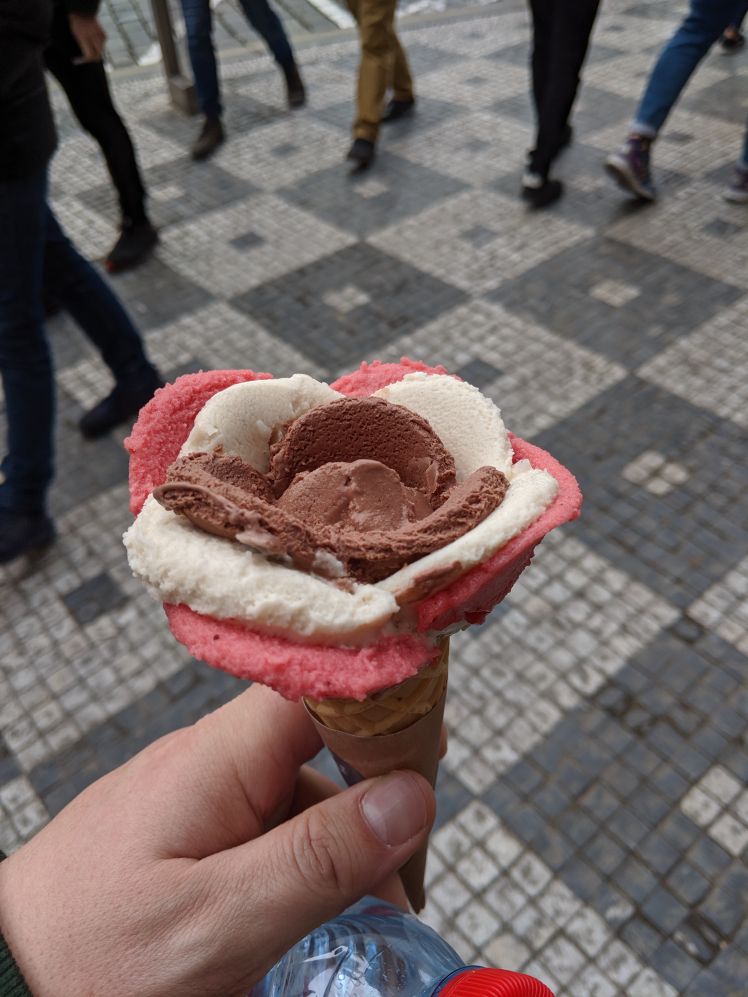 I ended up finding the fancy flower gelato ice cream shop, so I knew the art gallery was close. The ice cream shop made you stand in line to pay for your cones before they actually made it. I told the cashier I wanted what was in the picture, but for some reason that didn't include the macaron pictured. :(

It was still quite good.

After walking some more, I saw the steep staircase. Now I just needed to find the same gallery. Once I located it, I walked in and luckily the piece I saw yesterday was still on the wall. The clerk noticed my interest and we immediately started the haggling process. I was able to get a better price by paying in cash with Euros. It was the rest of my cash, but I was pretty excited and happily paid. A little while later, I was the proud owner of the now packaged artwork and headed toward the hotel.

On the way back, I could see the Petřín Tower. Since I needed to get some cash, I resolved to go back there and see if the fog was cleared by the time I got there. 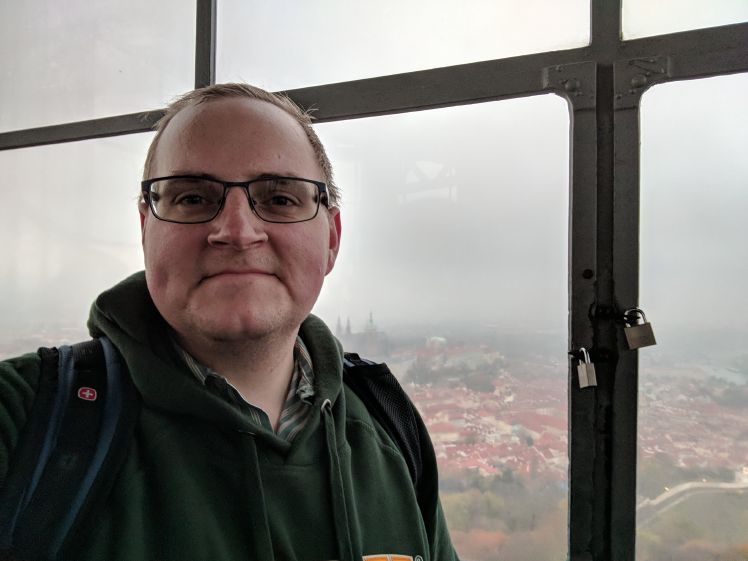 It was clearer than this morning, but still pretty foggy. After visiting the ATM, which only dispensed Czech crowns, I bought a ticket to climb the staircase up the tower. There are two observation levels with the lower one being open air. There are also two separate spiral staircases, one to go up and one to go down. The upper level was pretty humid, so I had to wipe off the window for my pictures. 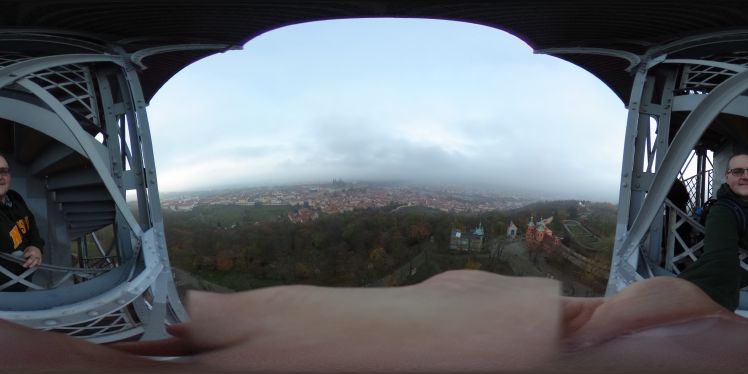 I snapped this on the way back down. It was a lot less humid out of the top. 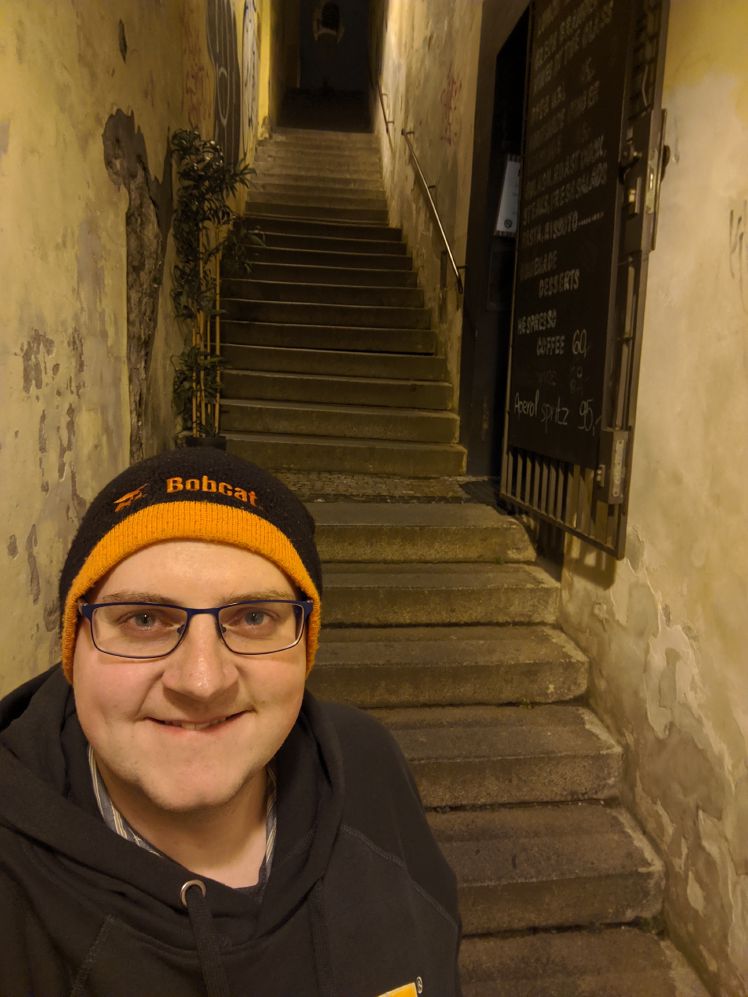 I made it back to the hotel and wrote some postcards. After that, I ventured back out to a restaurant I found with very good reviews. I picked it based on its location and endeavored to spend the last of my Czech crowns. This was the first time I calculated my purchases so closely to make sure I could pay with my cash. 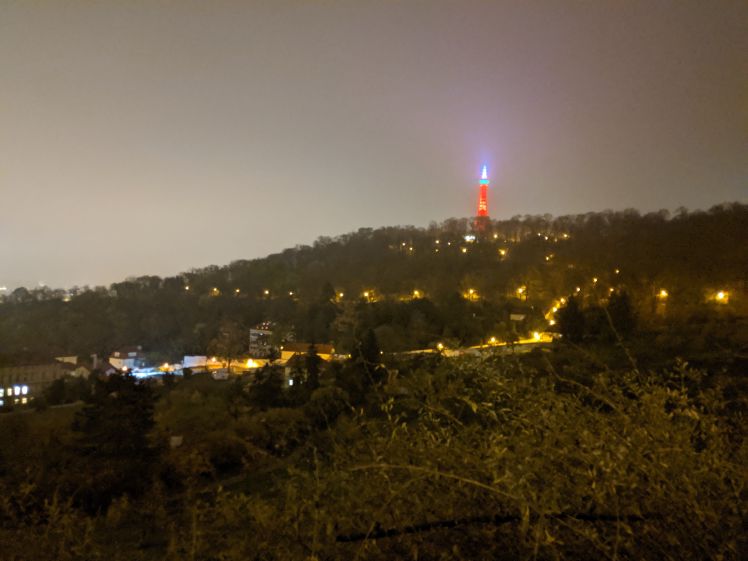 The tower looked romantic all lit up on the way to the hotel from dinner.

All in all, I really enjoyed my weekend alone in Prague. I know Amelia would love this place, so I am pretty sure I will be back at some point in my life.